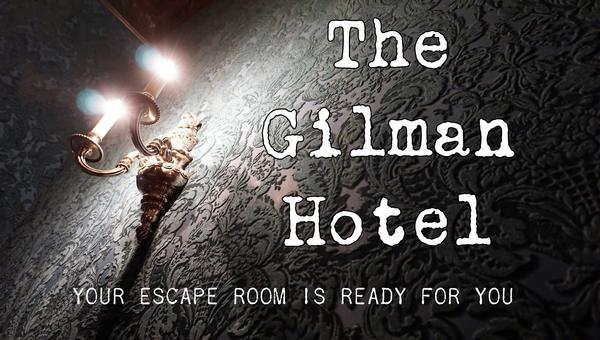 A private investigator had been looking into the disappearance of important occult artifacts in a derelict coastal town. You lose contact with him so head there yourselves but by the time you arrive night has fallen so you find lodgings in The Gilman Hotel.

This is the same hotel where he had been staying, you head to your room and start to investigate but it seems the locals are on to you. Find out what happened, solve the mystery and reveal the secrets of this strange coastal town…

Finally! An H.P. Lovecraft themed room! In case you aren’t aware of Lovecraft, he was a horror writer but if you are aware then this room contains some great references and is very thematic.

More excellent, friendly staff took us through what we would need to do in this room and although getting out is obviously the most important thing, it’s not the only thing you need to do here which adds a good bonus element.

The very moment the games master opens the door you are immersed in the story and the theme. There is a delightful surprise which we found soon after entering and a new take on something we have seen in a lot of rooms which made a nice change. There were some common puzzles which weren’t overly challenging in this room but, as with The Don, also a couple of unique ones. I particularly liked that there was an actual need for the puzzles, relevant to the story which was unfolding.

We flew through the first half and then one puzzle in particular stumped us for so long despite numerous nudges from the GM that we all got a tad frustrated resulting unfortunately in the rating being knocked down by a point, which may be unfair if it’s just us not being logical enough but we were told afterwards that it is the puzzle most people get stuck on. We got to the answer eventually and when we were shown how it should have been done once the game had finished it did make sense, although I do think an extra element added to the puzzle would have prevented that frustration. That said, we still think this room is worthy of 7/10 so that shows you just how good it was.

This is one of The Panic Room’s more difficult rooms and we just about managed to escape in 59:26, although we are usually pretty poor at the second room of the day.

Overall a good game but maybe a little overwhelming for brand newbies.