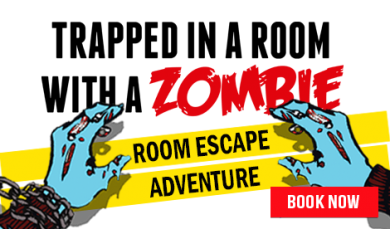 Dr Oxy has managed get himself turned into a zombie. In a moment of lucidity he chained himself up, but we managed to trap ourselves in the room with him, and now we’ve only got 60 minutes to escape before we become zombie fodder. For reasons that aren’t made clear, every five minutes he gets an extra foot of chain, so the clock really is ticking…

This is something a little different. Although we’ve done a few rooms with actors our favourites are the classics so if you like an actor in a room you may appreciate this more than we did. Having said that, the actor and host were both lovely and very funny and the rating is no reflection on them at all.

The unusual set of circumstances that got 10 people trapped in a room with a zombie professor whose chain keeps getting longer are still not entirely clear but not something you are really going to worry about while you’re in there. 10 people though, that was a few too many. Including the zombie and the host, that’s 12 people in a relatively small room, and when a zombie is chasing you some of those people are just getting in your way. We think maybe 7 people would be ok. You do need enough people to distract the zombie while others solve puzzles at the same time, and some people may get infected so 2 would not be enough.

The puzzles weren’t overly difficult but then they can’t really be when you have a zombie distraction. It was probably a good level of difficulty really but there also weren’t that many of them.

The zombie was funny as we said, and had a bit of facepaint on but didn’t really look like a zombie. The scariest bit was the corridor on the way in. So all in all it was quite tongue in cheek, which is fine but we would have preferred maybe very tongue in cheek, tone down the zombie some more and add in some more puzzles or very scary zombie for a fewer amount of puzzles. That would just be our preference though.

The room does make you work as a team though. It genuinely is a good team building exercise and would make a good work outing and the host goes through everything everyone is good at at the end. It’s a real feel good game in that respect and something we’ve not had since so good job on that guys!