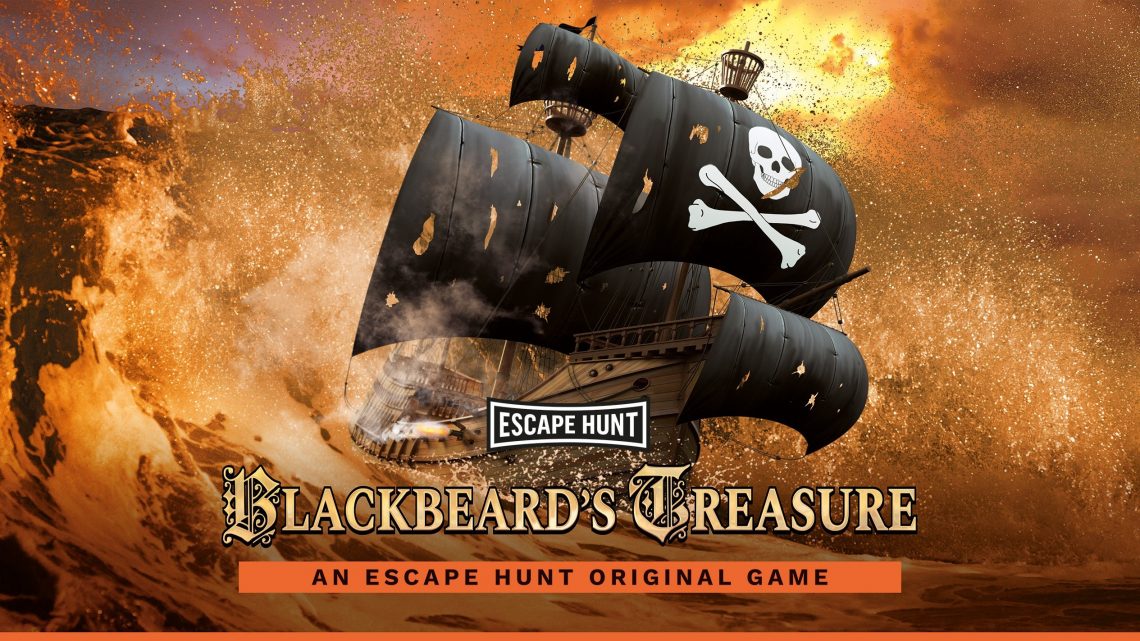 Blackbeard is dead, his loot lies unguarded. Sink or swim? It’s up to you.

Step onto a pirate galleon in the middle of a battle for control of the High Seas. Your captain, the terrifying Blackbeard, has just been killed and his ship is shot to pieces and sinking fast.
With no chance of victory, you and your scurvy shipmates decide to jump ship – after helping yourself to the contents of Blackbeard’s legendary treasure chest.
You’ve broken into his cabin to grab all you can, but now the door has jammed shut and you’ve just 60 minutes to escape; any longer and you’ll drown – if the sharks don’t get you first.

If you’ve read our other reviews you’ll know that this was our third Escape Hunt game, after the previous 2 had been broken. Our expectations weren’t particularly high as a result. We had been offered it for free after we had just escaped the Alice in Puzzleland room so we agreed as long as they had availabilty that day as we didn’t fancy making another trip for them. ‘Yeah, we’re dead today. You can go straight in.’ they said. Dead… on a Saturday…. in Lakeside. If I worked in their finance department I’d be very unpopular. E was not impressed that we’d said yes but majority rules so after a quick coffee we went into Blackbeard’s Treasure. The décor was ok. It was shiplike, but fairly sparse. It wasn’t the best ship I’d ever seen. As we walked through the door we were promised that nothing in this room was broken and the lights only flickered during the pre-game speeches. ‘That looks fun!’ I said, pointing to a large maze looking thing on the wall. Reader, I kid you not when I say that it was in fact, broken. They’d obviously put in a workaround, that workaround being that you don’t use the puzzle at all you just open a hatch with a key, but this actually resulted in us using the same key twice and that gave me a bit of the ick. One and done is the way it should always be. There was another puzzle that seemed pointless. That said, some of the puzzles were decent and it was the most enjoyable room out of the three that we’ve done. It may not have been if Alice in Puzzleland had been working, it’s difficult to tell.

Anyhow, we escaped. There are plenty of places to eat and shop at Lakeside so I went off to buy a book and mull over what just happened.

What I will say about Escape Hunt is that the staff are lovely and they do really seem to care about customer service. Maybe they just need some more robust items, or a better stock of replacements. Maybe we’ve just been awfully unlucky. In any case, I’m afraid our Hunt-ing days are over.