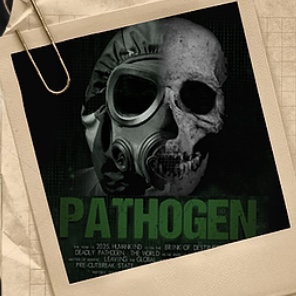 THE YEAR IS 2035. HUMANKIND IS ON THE BRINK OF DESTRUCTION FROM A DEADLY PATHOGEN. THE WORLD AS WE KNOW IT WAS WIPED OUT WITHIN A MATTER OF MONTHS, LEAVING THE GLOBAL POPULATION AT JUST UNDER 20% OF ITS PRE-OUTBREAK STATE, AND THE INFECTION RATE IS INCREASING RAPIDLY. HUMANITY IS ABOUT TO DISAPPEAR… FOREVER.

THE LAST REMNANTS OF SOCIETY HAVE WORKED TIRELESSLY TO TRACE THE SPREAD OF THE INFECTION. ALL SIGNS POINT TO AN INCONSPICUOUS RURAL LOCATION. ALL PREVIOUS ATTEMPTS TO GAIN FURTHER INFORMATION HAVE FAILED, LEADING US TO BELIEVE THAT THE SITE IS MOST LIKELY CONTAMINATED.

DESPITE THESE SETBACKS WE STILL NEED SOMEONE TO INVESTIGATE THE SITE; THE MISSION IS TOO IMPORTANT TO GIVE UP NOW. ANY ATTEMPTS TO ENTER THE AREA WILL CERTAINLY LEAD TO EXPOSURE AND THE DISEASE TAKES HOLD QUICKLY, WHICH MEANS YOU WON’T HAVE LONG.

THE HUMAN RACE IS ON THE EDGE OF EXTINCTION… PEOPLE ARE DIEING… YOU ARE OUR LAST HOPE.

Greeted by our lovely host who found us failing at the first hurdle by not reading the confirmation email properly…whoops, we were taken to an area to set the scene (after a bit of a chat first). Having a properly themed area to set the scene in outside the actual room, what a great choice. Already getting you immersed before you begin.

We were a little apprehensive about our first 90 minute room but we needn’t have been. The time flew by but at the same, being that bit longer, it really scratched our escape itch, if you know what I mean.

The room itself was incredibly well designed and put together, with plenty of little easter eggs if you’re geeks like us. Everything, including the clue system, was perfectly on theme the whole time.

There were plenty of puzzles to keep all 5 of us busy which were all on theme, including some specially made tech which worked really well and lots of variety.

A great room for 5 people but equally enjoyable for smaller teams. We think this room would be suitable for newbies and enthusiasts, although newbies would be totally spoilt!

We had so much fun in this room and highly recommend it. Looking forward to doing their new one once it’s ready.